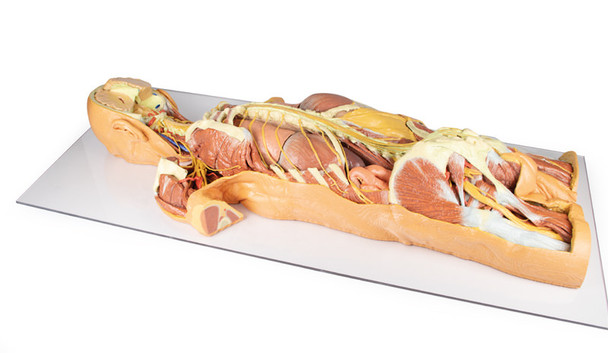 3D Printed Cadaver
Special Order
$13,583.00
— You save
Frequently bought together:

This 3D printed specimen presents a unique view of axial anatomy, presenting a dorsal deep dissection of the head, neck, axillae, thorax, abdomen, and gluteal regions. The removal of the posterior portions of the cranium and laminectomy from the cervical region to the opening of the sacral canal affords a continuous view of the central nervous system structures and origin of the segmental nerves relative to other axillary and appendicular structures.

In the cranium the two cerebral hemispheres are exposed in coronal section, separated by a falx cerebri that preserves the superior sagittal sinus, and supported by a partial tentorium cerebelli. The cerebellum has been removed and along the lateral margins, the sigmoid sinus has been opened. This exposes the fourth ventricle, pons and medulla oblongata, posterior inferior cerebellar arteries, and cranial nerves (CN VII - XII) arising from these brainstem structures.

Inferior to the cranium, the posterior cervical portion of the spinal cord is exposed through deep dissection and laminectomies (with the exception of the posterior arch of the atlas). At this level of dissection, the vertebral arteries can be observed ascending through the vertebral foramina and curving anteriorly on the superior surface of the atlas towards the foramen magnum. The roots of the cervical and brachial plexus are exposed, resting on the scalene musculature, cervical vasculature (common carotid artery on the right, internal jugular and common carotid on the left) and sternocleidomastoid muscles and can be traced anteriorly towards the margins of the dissection. Removal of the scapulae (fully on the right, partially on the left) the more distal portions of the brachial plexus can be followed passing superior to the first ribs and into the axilla, with the cords, divisions and terminal branches surrounding the axillary arteries. On the left side, the musculature is largely removed (with parts of the deltoid, infraspinatus, and teres minor muscles preserved) and the long thoracic nerve and lateral thoracic artery descend near the serratus anterior. The subscapular artery is shown dividing into the circumflex scapular artery (passing to the triangular space) and the root of the thoracodorsal artery. On the right side, the more full removal of the scapula affords a view of the brachial plexus structures and the passage of the axillary nerve and posterior circumflex humeral artery laterally towards the surgical neck of the humerus.

In the midline of the thorax the spinal cord is exposed through both laminectomy and dissection of the dura mater. The dorsal roots and rootlets of the mixed spinal nerves are exposed and pass laterally to the dorsal root ganglia (enclosed within dura). On the right side the thoracic mixed spinal nerves and the posterior thoracic musculoskeletal wall has been removed (from the 2nd rib to the level of the 11th and 12th ribs ) to expose the posterior surface of the lung and the posterior diaphragm. On the left side, most of the posterior thoracic wall has been removed, but the 3rd-5th ribs are retained to demonstrate the external intercostal musculature and the position of the 5th intercostal nerve within the space. In addition, the full sequence of intercostal nerves has been retained.

Inferiorly, the lumbar vertebrae and posterior dura mater have also been opened posteriorly to expose the conus medullaris and cauda equina through to the sacral region. On the right side, adjacent to the 12th ribs, the quadratus lumborum has been removed such that the subcostal and lumbar nerves rest against the perirenal fat capsule and psoas muscle. On the left side, the subcostal nerve arcs across an opened peritoneal cavity and the exposed kidney and loops of the jejenum.

The deep plane of dissection on both sides extends into the gluteal region, where the gluteus maximus muscle has been removed to expose the lateral rotators and neurovascular structures; as well as the musculature of the pelvic floor in the midline. On the left side, the gluteus medius is intact and the superior gluteal artery and nerve pass into the region just superior to the piriformis muscle. Inferior to the piriformis muscle, parts of the inferior gluteal artery and nerve, and the internal pudendal artery and pudendal nerve are preserved near the sacrotuberous ligament. The sciatic nerve passes distally through the space across the surface of the lateral rotators (e.g., superior and inferior gemelli muscles, obturator internus, quadratus femoris) into the posterior compartment of the thigh near the hamstring group. On the right side, removal of the gluteus medius and a deeper dissection into the true pelvis has exposed the lumbar and sacral plexuses and derivative nerves. This body replica comes on a transparent plexiglass base.

$934.50
Relief model, about 1/2 natural size, in SOMSO-PLAST®. Schematic representation of the central and peripheral nervous system. In one piece. Mounted on a green board.
CBS7127

$18.00 - $30.00
$19.00
The Autonomic Nervous System is the involuntary functioning part of the nervous system that controls the internal organs of the body. It is composed of sympathetic and parasympathetic systems which...
8026

$13,600.00
This 3D printed specimen presents a unique view by presenting a ventral deep dissection of axial anatomy from the head, neck, axillae, thorax, and abdomen to the proximal portion of the thighs...
MP1410

$18.00 - $30.00
$19.00
A classic illustration by Peter Bachin of The Nervous System, this chart shows in fine detail the nerves and their pathways in the body. The central figure is extensively labeled and shows the...
8949

$2,663.50
About 2/3 natural size, in SOMSO-PLAST®. Relief representation of the right side of the body, in particular the thoracic part, the cardiac plexus, and the pelvic plexus. In one piece. Mounted on a...
CBS7126/1

$13,600.00
This 3D printed specimen presents a unique view by presenting a ventral deep dissection of axial anatomy from the head, neck, axillae, thorax, and abdomen to the proximal portion of the thighs...
MP1410

Lower Limb - deep dissection of a left pelvis and thigh

$3,825.00
This 3D printed specimen presents a deep dissection of a left pelvis and thigh to show the course of the femoral artery and sciatic nerve from their proximal origins to the midshaft of the femur...
MP1813

$6,786.40
$8,483.00
This large, multipart 3D printed specimen displays a great deal of anatomy spanning the head, neck, thorax, axillae and upper limbs. Head and neck: The head and neck of the specimen provides views of...
MP1250

$1,853.00
This 3D printed specimen consists of a right partial lower limb sectioned just proximal to the knee joint and complete through a partially dissected foot exposing the structures on the dorsum. In the...
MP1809

$39.00
A unique chart that cover anatomy, technique and practice of cranial osteopathy.  A fantastic visual aide for patient education and teaching. The chart highlights the following topics: Cranial...
RU061

$438.00
$529.65
This flexible spine with ribs is an anatomically correct model of this section of the human anatomy that shows the interaction of the ribs, spine and associated structures. Stand is not included with...
CA7137TF