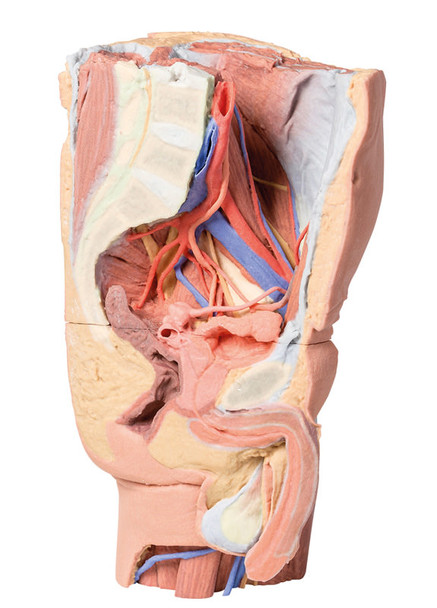 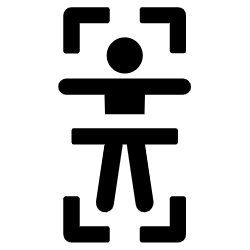 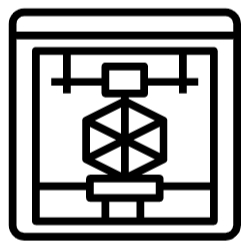 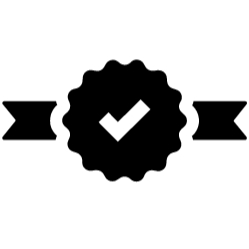 Reproduced on order and available in multiples

This 3D printed male left pelvis and proximal thigh (sectioned through the midsagittal plane in the midline and transversely through the L3/4 intervertebral disc) shows superficial and deep structures of the true and false pelves, inguinal and femoral region. In the transverse section, the epaxial musculature, abdominal wall musculature (rectus abdominis, external and internal abdominal obliques, transversus abdominis), psoas major and quadratus lumborum are visible and separated from each other and the superficial fat by fascial layers such as the rectus sheath and the thoracolumbar fascia. The psoas major muscle lies lateral to the external iliac artery, with the left testicular artery and vein lying on its superficial surface. More laterally (and moving inferiorly), the ilioinguinal nerve, the lateral cutaneous nerve of the thigh and the femoral nerve are positioned over the superficial surface of the iliacus muscle.

The left common iliac artery bifurcates at the level of the sacral promontory into the external and internal iliac arteries. This specimen does not possess a clearly defined anterior and posterior division of the internal iliac artery; instead, the terminal arteries sequentially radiate from the internal iliac. The lateral sacral, inferior rectal, inferior gluteal, internal pudendal, superior vesical, obturator and umbilical arteries (which terminates in the medial umbilical ligament) are visible adjacent to the sacral ventral rami. The inferior gluteal and internal pudendal arteries have not bifurcated in this view and track inferiorly over piriformis.

The deep circumflex iliac artery and vein can be seen passing deep posterior to the inguinal ligament, while the branches from the inferior epigastric artery and veins can be seen perforating rectus abdominis and the overlying rectus sheath. The left common iliac vein lies deep to the left common iliac artery; the obturator branch and the external iliac vein have been preserved.

In the midline the pubic symphysis and sagittal sections of the pelvic viscera are visible: from anterior to posterior, the bladder (receiving the left ureter, which passes over the iliac vessels at the level of the pelvic brim), the left seminal vesicles and vas deferens, and rectum (with surrounding external anal sphincter muscle). The pathway of the urethra is visible from the inferior pole of the bladder through the prostate gland, pelvic diaphragm and the corpus spongiosum of the penis. Inferior to the sectioned erectile bodies (corpus cavernosa and corpus spongiosum) lies the scrotum, where the skin has been removed to reveal the parietal tunica vaginalis.

On the preserved proximal thigh the fascia lata has been removed to highlight the transition of the neurovasculature and musculature from the pelvic region. Superior to the inguinal ligament a window has been cut to reveal the underlying aponeurosis of the transversus abdominis muscle. From medial to lateral, the femoral vein and artery have been removed from the femoral sheath, and the termination of the femoral nerve lies superficial to the iliopsoas muscle.. The great saphenous vein can be seen coursing medially over the pectineus, adductor longus and gracilis muscles, while branches of the femoral nerve pass over the profunda femoris artery. The thigh musculature is visible, with the cut sartorius muscle overlying the iliacus muscles and the origins of anterior thigh muscles (rectus femoris, vastus lateralis, vastus intermedius, vastus medialis). The tensor fasciae latae can be seen inserting on the anterior border of the iliotibial tract, which extends over the lateral surface of the thigh. A window has been cut to expose the underlying gluteus medius muscle, which terminates at the lateral aspect of the greater trochanter.

$215.95
$272.25
The male pelvis anatomy model is shown in median section. One half of male genital organs with bladder is shown at the normal position in the male pelvis. The rectum is removable for a more detailed...
CH7111

Lower Limb - deep dissection of a left pelvis and thigh

$3,825.00
This 3D printed specimen presents a deep dissection of a left pelvis and thigh to show the course of the femoral artery and sciatic nerve from their proximal origins to the midshaft of the femur...
MP1813

$39.00
A unique chart that cover anatomy, technique and practice of cranial osteopathy.  A fantastic visual aide for patient education and teaching. The chart highlights the following topics: Cranial...
RU061

$3,262.00
Male, modelled according to nature, in SOMSO-PLAST®. Lifelike representation of all anatomical details of the bone structure. Skull with removable calvarium and mandible. Joints are flexibly mounted,...
CQS7110/9

$18.00 - $30.00
$19.00
A popular and useful chart showing the anatomy and structures of The Female Reproductive System.Clear concise illustrations show the following: ovary, fallopian tube, uterus and vagina detail of an...
9652