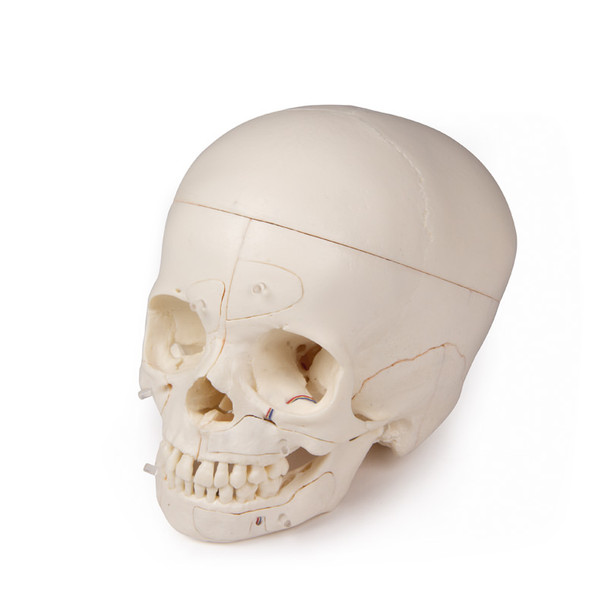 In Stock - This item should ship within 1 business day

This skull model is a cast of a real human children‘s skull specimen and shows all anatomical structures in great detail. It was developed for students of anatomy, medicine, surgery, ENT medicine, ophthalmology and dentistry. The skull is complexly cut and joined together with metal and magnetic connections.

The top of the skull is open and removable. Bony impressions of the sinus sagittalis, the sinus transversus and the sinus sigmoideus as well as the meninges are painted. The base of the skull is cut sagittally in such a way that the cut runs through a sieve plate on one side and another cut with the same plane through the other sieve plate of the ethmoid bone, which leaves the Christa galli and the perpendicular plate as well as the entire nasal septum intact. The structures of the anterior, middle and posterior fossa are easily accessible. One can see the nasal cavity, the turbinate, the septum and the bony and nasopharynx directly. The nasal septum can be removed from the surrounding bone structures. The removable temporal bone shows a complete external auditory canal.

The upper jaw and the lower jaw show the structures of the teeth, the roots, the bony edge of the alveolar process as well as dental nerves and vessels. The maxillary sinus can be opened by removing a flap. The teeth, including the permanent teeth still embedded in the bone, can be made accessible by removing a bone flap.

$1,195.00
$1,494.90
This replica of the human skull is one of exceptional quality and anatomical detail. The skullcap is removable and the base of skull is mid-sagitally divided. The skull model features a frontal...
CA7127

14-Part Model of the Skull, didactic

$978.25
Modelled according to nature, in SOMSO-PLAST®, after Prof. Dr. med. Dr. med. h.c. J.W. Rohen, Department of Anatomy, University of Erlangen. The model of the skull comprises 14 individual parts, that...
CQS718/3C

Artificial Demonstration Skull of an Adult

$2,593.50
Modelled according to nature, in SOMSO-PLAST®. With representation of the blood vessels and nerves (N. trigeminus and N. opticus etc.). Separates into 10 parts:1. Calvarium with coloured vessels and...
CQS718/11

14-Part Model of the Skull

$591.50
Modelled according to nature, in SOMSO-PLAST®, after Prof. Dr. med. Dr. med. hc. J.W. Rohen, Department of Anatomy, University of Erlangen. The model of the skull comprises 14 individual parts, that...
CQS718/2

$985.00
Perfect for teaching the overall cranial anatomy while giving a deeper view in to the internal structures and features of the skull. Dissectable into 14 parts: A horizontal section of the skull...
CA226

$3.85
$4.15
Standard density teeth already prepared to simulate exam conditions. Various preps are available. Exam PrepRead our post here about teeth which may be unavailable or restricted. We receive many...
A21A-200

$12.45
Teeth with transparent root and colored pulpal wall. Made of epoxy resin. Natural colored crown with clear root the same shape as A5-200 teeth. Please note there are no returns or exchanges on...
S12-200

Reconstruction of a Skull of Australopithecus afarensis

$675.50
Natural size, in SOMSO-PLAST®. Expert guidance for the reconstruction provided by the Department for Prehistoric Anthropology and Human Ecology of the University of Göttingen. Fossil sites...
S 7

$195.00
$205.00
Perfect for the a home practice setupThis portable stand features durability and versatility and allows full 360-degree access around the typodont. This access allows faculty to easily demonstrate...
portasim

$100.65
$112.20
A very popular student resource for anatomy studies in Medical and Dental programs. Contact us for bulk/class pricing. This 3 part medical quality human skull replica is a first choice for...
CA7120

$367.35
$471.75
This fascinating model of an average European adult skull can be disassembled into 22 single bones. During development of this model one of the main targets was to make the model easy to assemble...
E4708

$330.00
A very realistic model of a 38-week foetal skull manufactured from our unique bone-like material. The separate skull bones are clearly shown and meticulous moulding distinguishes such detail as...
4518

$65.36
$95.00
This enlarged model of the adult mouth is great for teaching and demonstrating correct brushing techniques.  With 32 teeth, floating tongue with an included enlarged tooth brush this model will...
20150